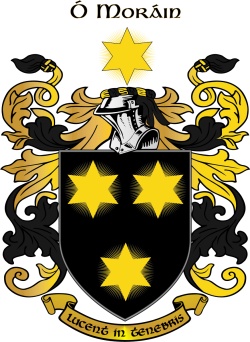 Ó Moghráin, earlier as Ó Mughráin- anglicised Moran, earlier as O Morone. Woulfe ('Sloinnte Gaedheal is Gall', 1923) gives the root as 'slave-seal', but this is conjectural.

Ó Murcháin- anglicised Morahan, Morrin and generally as Moran, which makes it difficult to distinguish from the above names. I would not speculate as to the root of this name.

The first name mentioned is that of a family of uí Fhiachrach, a tribal grouping located in present counties of Mayo and Sligo. The Uí Fhiachrach descend from Fiachra son of Eochaidh Muighmheadhoin, legendary 4th century king of Ireland. The Uí Mhóráin had territory on both sides of the River Moy, and their chief family resided at Ardnaree near Ballina.

The second family were of Clann Cathail, the 'tribe of Cahal'; he was a son of Muireadhach (Murray) Muilleathan, an early king of Connacht. They were to be found in what is now Co Roscommon. Another family of this name were of the Uí Mhaine, a tribal grouping descended from the great and ancient Orghialla (Oriel) of Ulster; this family were located in Co Galway, largely in the baronies of Killian and Ballymoe.

We come to the last name above, Ó Murcháin, whose anglicisation in later times has made it indistinguishable lexically from the predecessors. This is a sept of East Offaly and Kildare.

It must be stated that none of these three family names are in any way related, except insofar as they have 'fallen together' in orthography. However, a person with a family tradition linking him/her to any of the above regions might have a good idea as to which sept he or she belongs. The problem, of course, is that English is an ill-fitting instrument to distinguish the subtle sound nuances of Irish names; add to that the tendency to spell names phonetically, by the colonial bureaucrats and clerks, and the tendency also to assimilate similar sounding names.

Which brings us to Sir William Petty's 'Census' of 1659, an ambitious survey of Ireland and its population, which is sadly incomplete: for our purposes, Cos Mayo & Galway are missing. We find the above names as 'Principal Irish Names' in the following counties:

James O' Moran (1739-94) born in Elph, Roscommon. He went to France and joined Dillon's Regiment of the Brigade Irlandaise, as a private soldier. He helped to inflict a reverse on the English troops of the 'grand old' Duke of York, at Dunkirk in 1793, though his men were heavily outnumbered. He rose to the rank of général de corps d'armée. Sadly he was arrested and guillotined by the Jacobins, during the French Revolution.

Robert Moran (steamship engineer) and brothers Peter and Edward were New Yorkers who moved to Seattle and founded the Moran Brothers Shipbuilding Company, which produced many of the ships that navigated the Bering Sea during the Alaskan Gold Strikes of the late 19th century.


Who have we missed?

Tell us about any famous MORAN (or surname variant) you think we should add here. We will get our genealogists to check them out and add them to the list. Thanks!

Join the conversation with the MORAN tribe

Didn’t know there was so many people with Moran as a last name! I grew up in the US but my family originates from Guerrero, MEXICO.

I'm looking for possible Irish relatives whose ancestors migrated to Mexico around 1900. My great grandfather Roman Moran lived in Mexico and my great great grandfather was supposed to have migrated from Ireland. But I do not know his name. Thank you.

I have been to to Oyster bar and the owner looks exactly like my grandfather. The owner gave me 2 key chains - very generous!! Our history is lost other than some loose information from Ancestry DNA. I did a Y DNA search years ago and had it downloaded and sent to Irish origins linking us to the following surnames: Doherty, Campbell, McCampbell, McGee, Gormely, MacAdams etc. M222 aka Northern Irish. Assuming from Sligo. Another interesting fact on Ancestry I’m related to several African Americans from the Caribbean- so apparently some of my people got shipped by Cromwell after their defeat. My mother is 100% Norwegian and the Irish Moran’s never owned slaves. My Irish Brady and Moran family made it to Minnesota in the 1860’s. Th

Since last I posted, I found out that m family came from the Galway area, but still looking for the year. Had nice visit with possible family at the "Moran's Oyster Cottage" in Galway. Terrific food also!

Areas of Origin for MORAN

Write an email address and click 'Invite' to share this page with more members of the MORAN tribe.

Discover where the MORAN Family members live around the world

Show off the MORAN Family Crest…