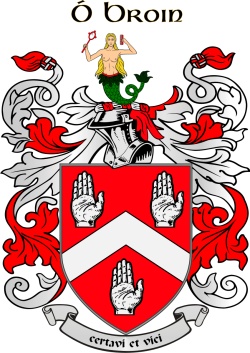 Design your own BYRNE Family Crest

Ó Broin - anglicised widely as Byrne, and occasionally Burns and Byron. From 'bran' or raven. This is the numerous Leinster sept.

Ó Birn - anglicised Beirne, Byrne, Burns, Byron. According to Woulfe ('Sloinnte Gaedheal is Gall', 1923) this is a variant of Ó Beirn, and means descendant of 'Bjorn', a Scandinavian first name. It is largely a Connacht name.

The vast majority of (O) Byrnes are Ó Broin, which is a patronymic derived from chieftain Bran Mac Maolmorrdha, King of Leinster (d. 1052). The original patrimony was of the Uí Faolain, according to Woulfe, in northern Kildare, from where they were driven into the Wicklow Mountains by the Cambro-Normans mercenaries in the 1170s. From their mountain fastnesses they harassed the 'Pale' colonists during the Elizabethan 'expansion'. Even during Cromwell's brutal Expugnatio they hit back, with their allies the O Tooles, with effective guerrilla style raids into enemy territory.

Ó Birn or Ó Beirn was the name of two distinct septs in Connacht: of Siol Muireadhaig (Silmurray), stewards to the O'Connors in Co Roscommon, and of a sept of Co Mayo. The name was found around Ballinrobe in the latter county by the 19th century antiquarian, O' Donovan.

In Sir William Petty's 1659 'Census' we still find Byrne as a 'Principal Irish Name' in considerable numbers in Co Kildare:
Birne (26 families) in Ophaley Barony; Birne (40 families) in Naase Barony; Birne (6) in Clane Barony; Birne (13) in Connell Barony; Birne (28) and Bryan (9) in Salt Barony; Burne (24) and Brin/Brinne( 5) in Lebban and Narragh Barony; Birne (31) in Kikea and Moone; Birne (10), and Daniell Birne is listed as a 'gentleman titulado', in Ikeathye Barony; O Bryne (7) and Birne (5) in Carbury Barony.

Unfortunately, the returns for Co Wicklow are missing; perhaps the Cromwellian bureaucrats were reluctant to follow the O Byrnes into the Wicklow Mountains.

The Registrar's Report on Births in 1890 has the highest numbers of Byrne in Leinster at 583, the next highest being in Ulster at a mere 53. The most populous counties were Dublin, Wicklow, Wexford and Louth. It was actually the most numerous to occur in Wicklow and Louth, and the seventh most numerous in all Ireland.

Two Formidable Byrnes:
Fiach MacHugh O'Byrne (Ó Broin) was Chief of the Wicklow Byrnes in the time of Elizabeth 1st,, and a suitable scourge of English expansionism in Ireland.
Emmet Francis Byrne (1896-1974) was born in Chicago and served as the Republican Representative for the third District of Illinois 1957-59. He was an alumnus of Loyola University, Chicago.

Tell us about any famous BYRNE (or surname variant) you think we should add here. We will get our genealogists to check them out and add them to the list. Thanks!

Join the conversation with the BYRNE tribe

Hi Jackie, have you done an ancestry dna test? It's a possibility we may be related.

Well that formatting did not come through. Hope it can be understood

I have never had contact with my Dads side of the family. His name was Gerald Vivian Byrne. He moved from Rathgar to England at the age of sixteen. He had a full sister named Una and 6 half brothers from his Mums second marriage. I like to hear from any one in the family with any information thankyou

catherine brynne born 1853 was born in Derrybawn wicklow in 1853 she married john durkin born 1847 in Charlestown in county Mayo. these are my relatives any idea how i can find out more please.I know they left and moved to England but when and who were their Irish relatives?

Areas of Origin for BYRNE

Write an email address and click 'Invite' to share this page with more members of the BYRNE tribe.

Discover where the BYRNE Family members live around the world

Show off the BYRNE Family Crest…